Someone recently asked me whether encryption could be used as a replacement for more traditional security tools like Anti-Malware or Firewall products. In order to answer that question, it’s helpful to give a quick bit of background about what encryption is and how it’s useful. Simply put, encryption is a way of taking data and converting it so that it cannot easily be read. It sounds terribly complicated and mathtacular, but it isn’t always.

Most kids have played with a very simple form of encryption. If you ever had one of those secret decoder rings that came as a prize in a box of cereal or solved a Cryptogram puzzle, you were playing with encryption. Decoder rings are using one of the simplest methods of encryption called a rotational cipher – it rotates the alphabet a few letters to get its code. Cryptograms (or Word Scrambles) are a game where you solve the puzzle by substituting letters for one another to decode a phrase – it’s asking you to decrypt what’s called a substitution cipher. 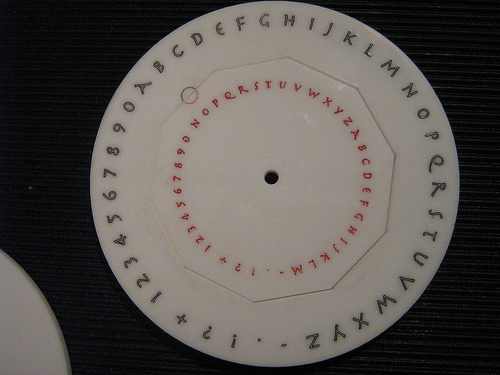 A simple form of encryption.

In transit, you use encryption to dissuade people from eavesdropping on your conversation. This could be any sort of web traffic, though one of the most common forms you’ll run across is encrypted web traffic. Facebook uses this by default. Your bank almost assuredly does – any time you see that little lock up by the web address and an address that starts with HTTPS, that’s what’s happening. That’s why we tell you to look for that lock when you want to make sure your data is kept private and that you’re protecting yourself against cyber-criminals.

When you’re storing files, encryption is good because that makes it harder for people to steal the data inside them. It won’t stop malware from damaging the files or deleting them, but someone can’t make off with the data inside when files are just sitting on disk. This can help prevent identity theft, among other things.

There is one time when encryption will not help you, and that’s when you’re looking at the data in a readable form. This includes any time the encrypted file is open, even if it’s covered up with other windows, because opening the file has decrypted it in the computer’s memory. If the data is in a readable form, anyone who has a backdoor into your machine can access that readable data. This is not to say that encryption isn’t useful – in fact, it can do a lot to save your bacon if someone is able to hack into your computer or anyplace you store data. This is, as we’re so fond of saying, why layered defenses are a good thing: one technology can help bolster the effectiveness of another.

So to answer our original question, if you’re using encryption, this doesn’t obviate the need for other security products. It can help protect your data in case of hacks that don’t involve malware, or in the unlikely event that you are hit with targeted malware that is so obscure that your other security products haven’t yet added it. Happily, both OS X and iDevices have some really awesome encryption capabilities built-in and ready for you to use, so give it a whirl!